At the beginning of the SummerTour 2017, after having a real marathon to finish the film in spring, we had to realize that it was just not enough. 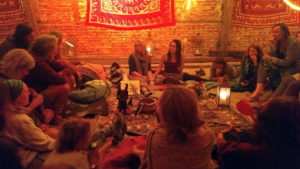 We have noticed through various premieres and feedback’s that we have not yet arrived at the destination. Recognizing this after our spring marathon was exhausting for us. Personal topics were added and so, after three years of working together, we first had to take a break from each other. It felt like winter in the CircleWay Film project.

On the last day of the German CircleWay Summer Camp in Oelde, Mia left Martin and Heiko furious once again. After only three days of “summer vacation” at the camp, she drove back to Cottbus with all her luggage as well as her daughter Lea. 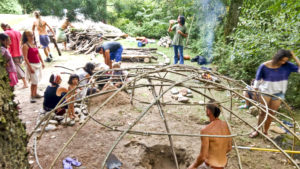 Heiko and Martin drove on to the community Schloss Tempelhof and showed the film there. Then Martin took a break and traveled to the Atlantic coast. Heiko remained as last man standing. He continued the tour as planned, including the Community Lenzwald and the Austrian CircleWay Camp. At the beautiful Valchiusella in Italy, Heiko and Martin finally met again and spent wonderful days with the Italian circle family. Thanks to great support, the film could even be provided with Italian subtitles! 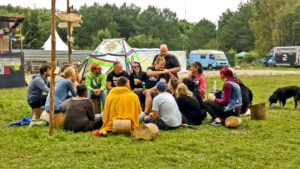 It was not until the beginning of September, after the end of the Italian CircleWay Camp, that we met to work together on our “Spirit” booth at the Landflucht Festival in Lusatia. Although there was a lack of intensive communication, working together was surprisingly good. Martin and Heiko had driven directly to the festival area from Italy. Within a week they had crafted a real gem with lots of wood into the landscape. The magic crafting has had its price, because Martin and Heiko were pretty drained and tired out just about when the festival itself started.

Luckily, we are a team after all – that’s how Mia helped out with friends during the festival. Together we were able to lift workshops, bars, T-shirt printing and music.

After the festival, Mia again sat down to complete the film. Due to the loss of the summer vacation and her break of the tour, she spent almost the entire year in front of the computer and in the CircleWay movie. Martin and Heiko needed even more distance from the film after the tour and rearranged their lives. 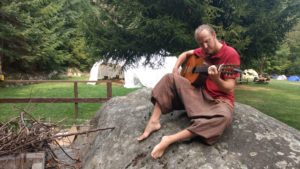 The story of our circle is also a learning process, individual and communal. Since the beginning of the project in 2015, each of us has experienced personal ups and downs. Unconscious stuff, old wounds and pains, beliefs, as well as new strengths, new decisions, abilities and parts of our purpose came to light – 3 very intense years. This was all important and necessary to be at this point where we are today. At the end of the year, the three of us reunited. We used the CircleWay methods and found out that we started this project together and that we want to complete it together in 2018.

Thats the moment when some of you may wonder, “If the team has been working on the movie for 3 years and Mia spent all the year in front of the computer, why is it not getting finished?” Or “How do you want to complete the project in 2018 with all the things going on there?”